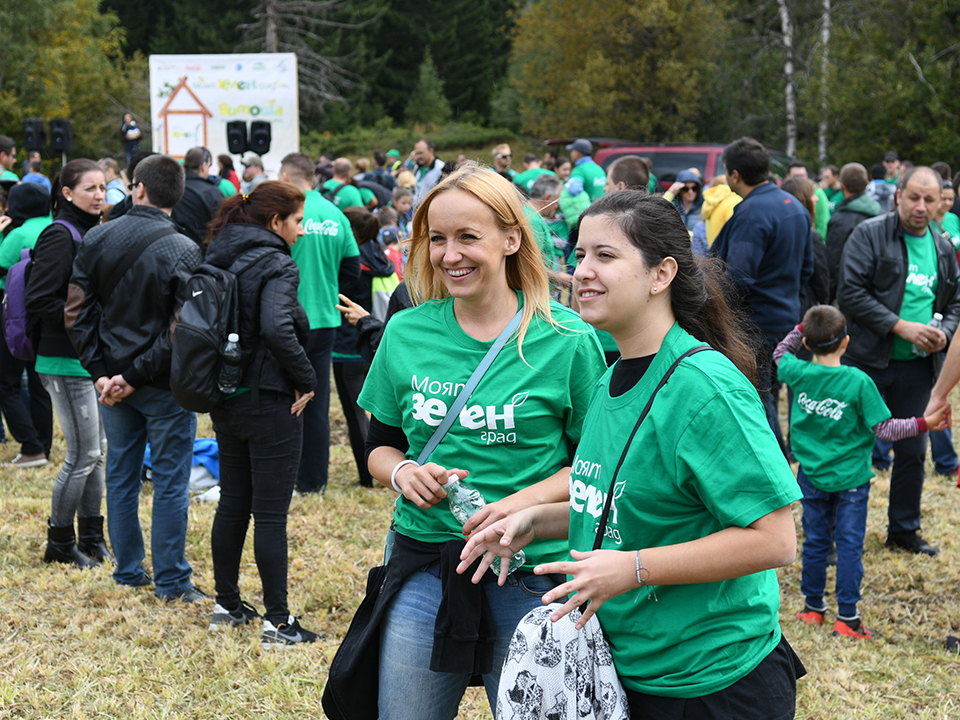 SHORT DESCRIPTION OF THE PROJECT

The initiative MY GREEN CITY was launched in 2008 and is currently the biggest environmental initiative of the Coca-Cola System in Bulgaria. The project is aimed at protecting biodiversity and water resources in urban environments. In 2012, the campaign changed its format, turning from an environmental event into a year-long educational campaign under the slogan “Be green not only for a day.” In 2014, the initiative continued to expand its focus in support of flood victims in the country. Over 2,500 volunteers from 23 cities joined forces and contributed to environmental protection in the largest ever edition of the campaign. Volunteers from Sofia, Bankya and Kostinbrod took part in the cleaning up of the Arboretum and Iglikini Polyani areas at the Vitosha Nature Park. Campaign participants cleared the clogged ditches and pits, restored broken bridges and railings, painted and lacquered picnic tables, benches and gazebos, and set new lounges for relaxing in the sun.

Additionally, the management of the Coca-Cola System in Bulgaria granted the Bulgarian Red Cross cash assistance of BGN 130,000 for the purchase of essentials to be donated to families in the affected regions.

At the very start of the 2008 campaign, MY GREEN CITY was one of the first environmental initiatives involving volunteers. Subsequently, as similar campaigns for cleaning and protecting the environment were well received by the public, many companies launched environmental campaigns of their own. This, in turn, made it more difficult to distinguish between similar initiatives in terms of communication, while attracting more people to participate actively in the gentrification activities.

A key feature of MY GREEN CITY since 2012 has been education – not only during the events, but also as a long-term training programs for adolescents. The success of the campaign over the years is based on a number of initiatives such as “Ecobreak,” where students have the opportunity to learn about nature and its preservation.

The continuous expansion of the scope and profile of the campaign’s activities is also one of the reasons for its effectiveness and public visibility, and the partnership between MY GREEN CITY and the Bulgarian Red Cross in relation to the flood disaster in Misia marks yet another important step in this direction.

In 2014, MY GREEN CITY was larger in scale and better than ever before. The team managed to establish a partnership with the Bulgarian Red Cross, which aims to support society’s long-term needs. Moreover, as part of the initiative, representatives of various institutions and celebrities supported the event and set an example by their active participation in all activities. They demonstrated how to take care of nature, thus becoming an example not only for their fans but also for the entire community, since the media wrote a lot about their participation in the initiative.

In 2014, MY GREEN CITY achieved better results than previous years: